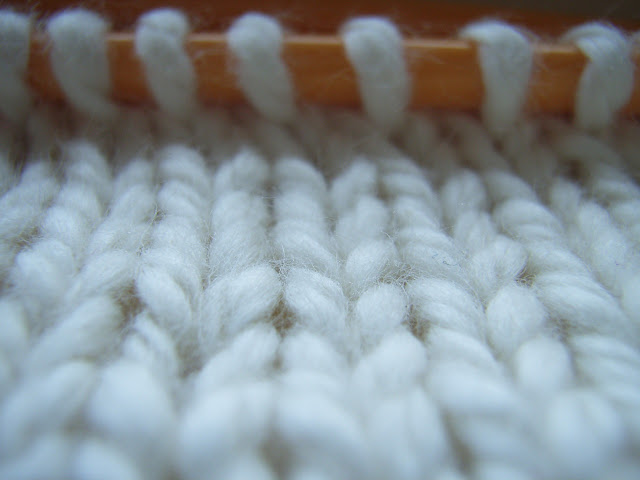 So, can you feel how excited I am? I've never been able to knit, every time I tried I never got past the first couple of rows. It never looked like it should and the tension was all over the place. I can't tell how much this annoyed me. It was how I cast on - simple, fix that and I was off - here is the proof. My first knitty stitches - yay!!! Now the obsession begins!
Posted by Unknown at 7:53 AM 3 comments: 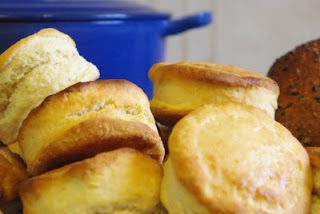 Well it's been a long time between food posts I know. Today is a perfect day to end the drought. Suzy was in full hausfrau mode this morning. Bread made, yoghourt fermenting, slow cooked beef on and scones out of the oven all before 9.

There was a reason, Suzy and the girl-child were receiving visitors and there isn't anything much easier for such an occasion than Suzy's scones.....there are a bit of a cheats version, but never fail.

Ingredients - 3 cups SR flour, 1 cup cream and 1 cup of lemonade. I KNOW - crazy! Mix together, but not too much as scones need to be a bit crumbly. Roll out to about 1 inch think and cut out. This makes about 12-14, depending on the size of your cutter. Bake in a 230 or so degree oven. This is important, make sure it is that hot before you put them in. Bake for 10-12 minutes, basting with milk 5 or so minutes into it.......

I have just recently come back to making scones this way, after a period of time where I felt that I was cheating and should make them properlike. The traditional recipe I used, from the good ol' gals at the CWA was a cracker too and will post about it another time. The only down side to my lemonade scones is that they don't keep and need to be eaten on the day.........what a shame!
Posted by Unknown at 2:01 PM 1 comment:

Labels: In the kitchen

Suzy and the quilt

Sunday afternoons are quickly turning into sewing time around here. The man of the house can watch the squidgets and I get some (mostly) uninterrupted time to potter around.

I've never been a "quilter". If I'm brutally honest most quilts don't really do it for me. I tend toward simple lines and design and find a lot of quilts a bit fussy. Having said that though last year I did make a quilt for the boy-child, all by the seat of my pants. It will never been shown on this blog, as the sewing is dreadful! But, both the man of the house and I were surprised to find ourselves falling for the luxurious feel of two layers of fabric separated by batting- so cosy and warm. So I'm making quilts all around, first off the girl-child. 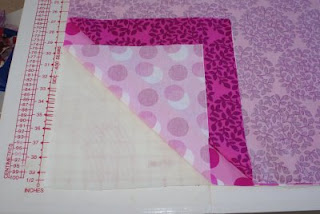 This is a great simple quilt, one fabric for the front and another for the back, wadding in between, my choices were "Off Beat Spot from the Rainbow Garden by Prints Charming" (sounds like a horse pedigree!) and "Leaf Dots from FreeSpirit".

Now I should say categorically I know NOTHING about quilting. Once you sew the fabrics together, you "quilt" the whole thing with satin stitch dots (by machine) in a grid pattern all over. I tried to do straight stitch grid all over - I don't think so!

LESSON ONE - there is a reason that you quilt the fabric before the borders are sewn/bound........I ended up with all of this puckered fabric and had to unpick about 5 rows - YUK

LESSON TWO - when you know NOTHING about something/anything don't try to change the pattern until you know a little more than NOTHING!

So, ego bruised I went back to the book followed the instructions precisely and voila! 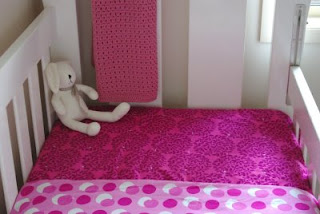 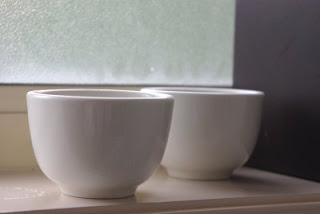 A long time ago I bought these gorgeous tea cups from a shop in Chinatown...it was bcc (before 2 x children) when the man of the house and I owned a fantastic inner city pad in the wonderfully downtown and a bit seedy area of Brisbane - Fortitude Valley. It was a great apartment, huge - in a century old department store with high ceilings and arched windows (just like the one on Playschool!)....anyway back to the tea cups.....

From memory I think they were less than a dollar each and I couldn't believe it. Over the years they've rarely been used for tea - usually yoghourt, sauces, dippity-dooda things. But now they've found another use.......candles.

I know it's not a huge jump of creative inspiration to turn these into candles, but as a serious bath connoisseur I'm enjoying the result........ 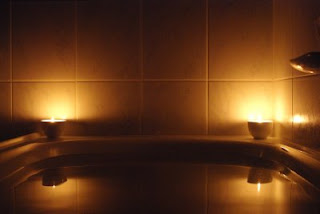 And they couldn't be easier. All you need is candle wax, some wick, blue tack, a kebab stick and some fragrant oil if you please. Firstly secure the wick to the bottom of the tea cup with the blue tack and wind the other end of the wick around the kebab stick so that the wick is taught when the stick lays across the top of the cup. Melt the wax in a dish over hot water, I suppose you might even be able to do this in the microwave. Add the oil, mix and pour to within 1/2 inch of the top. When the candle sets you will get a depression (not GFC - hehe) in the middle. You can then use a toothpick, or another kebab stick to make some small impressions around the wick, melt a little more wax and pour to within 1/4 inch of the top...voila! You can use candle colouring, but I don't as I like a white candle. I bought the wax, oils and wick from New Directions.
Posted by Unknown at 8:56 AM 2 comments:

Labels: Around the house, Making gifts

I know that I made the big statement last weekend that I would be finishing FIVE WIP. It was never going to happen, but I tend to often make big plans like that to help motivate me to do more than I should. Anyway, I have managed to get (or nearly get) the biggest WIP that I had off my table (or nearly off). 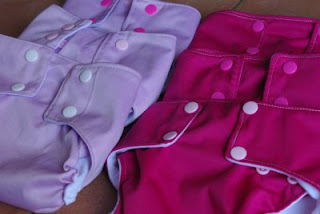 Towards the end of my pregnancy with the girl-child I discovered the "new" cloth nappies. I hadn't seen them when the boy-child was a babe and I was intrigued by a cloth nappy that didn't have all the drawbacks of the old style ones - in particular the folding, inability to wick moisture away from said-babies bum and the stuffing around with pins etc. These new all-in-one nappies seemed to be about $17 a pop, so they were never really a cheap option...given that I figured we would need about 20.

Then I found a few online places that sold the special fabrics and gave a call-out to Georgie who happily passed on her nappy knowledge to me. She gave me some great advice, pointed me in the direction of some Australian suppliers and showed me the ropes...and I was off. Or so I thought.

I bought my special Snap machine, agonised over fabric, finally purchased it and then it sat - AGAIN! So last week, sick of paying about $17 a week for disposals I bit the bullet. Decided not to buy any more nappies, and basically sewed nappies just out-pacing the girl-child's requirements.

So to the particulars, the outside is Poly PUL. The inside fabric (closest to babies skin) is suede cloth which wicks the moisture away nicely and is not too bulky. For the insert I used bamboo and some old towels (again thanks Georgie) which I overlocked together to make a pad shape. These are stuffed inside the nappy, and after Georgie's advice are the best option for places like Canberra in winter where the washing takes a really long time to dry. I'm thrilled at the result. I'm not adding to landfill with 6 to 8 disposals every day and I'm loving saving money (I estimate about $800 a year)...and I think they look pretty too! 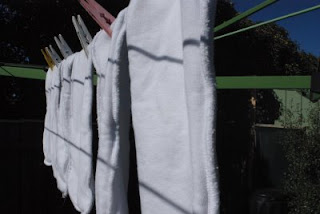 I got about 7 nappies from each metre of PUL and suedecloth, which when combined with the cost of the bamboo insert came to $5.45 a nappy. OK so I had to buy the snap machine, but I'm sewing bibs like a storm and have many other plans for using it...stay tuned for more.
Posted by Unknown at 6:52 AM 3 comments:

Labels: With needle and thread 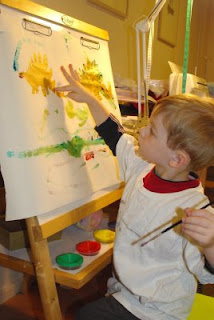 Sometimes I think we focus on the bad, I know I can. Sometimes being a mum is full of hard, "I don't really want to remember this" moments. But yesterday, I took the time to enjoy a great "I really want to remember this" mummy moment. It was my favourite time of day, the hour or so before sunset. Usually known in our house as cocktail hour. I love this hour year round. I love it in summer, especially when it's a balmy evening just after the lawn has been mown. I love it in the colder months, when I close all the curtains and blinds and get ready to cocoon inside for the night, such was the case last night.

Anyhoo, it was my favourite hour, I was in the kitchen preparing dinner, the girl-child at my feet and the boy-child working on his masterpiece with Vivaldi's Four Seasons - Spring playing on ABC Radio as background music. Bliss. It may sound cheesy but it felt like a good mummy moment!
Posted by Unknown at 6:32 AM No comments:

Labels: With the little ones 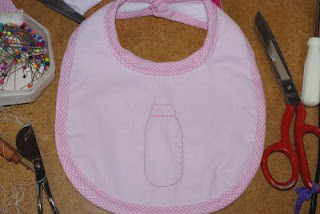 A few lazy Sunday afternoons ago little Suzy Hausfrau enjoyed a wonderful Stitchy Tea party with new Brown Owl friends. The craft of the day was embroidery, a foreign and oft strange discipline that Suzy had never had the chance to enjoy. The project of choice was a "steppin' out bib" for the girl-child...inspiration from the wonderful Gifts for Baby book. Suzy learnt how to stitch a little and then raced home and finished the stitching within the hour..........and then it sat.......and sat.........and sat.

Finally this afternoon Suzy picked up said stitching, attached a fine one sided terry cloth, bound the two fabrics with some pretty gingham and added a snap...all in about half an hour! Why is it so? Why have such gusto in the beginning, and then let it languish forever? This I must admit is probably one of about FIVE WIP that I am determined to finish over the weekend. There I've said it - FIVE. Hold me to it!
Posted by Unknown at 6:13 PM 1 comment: 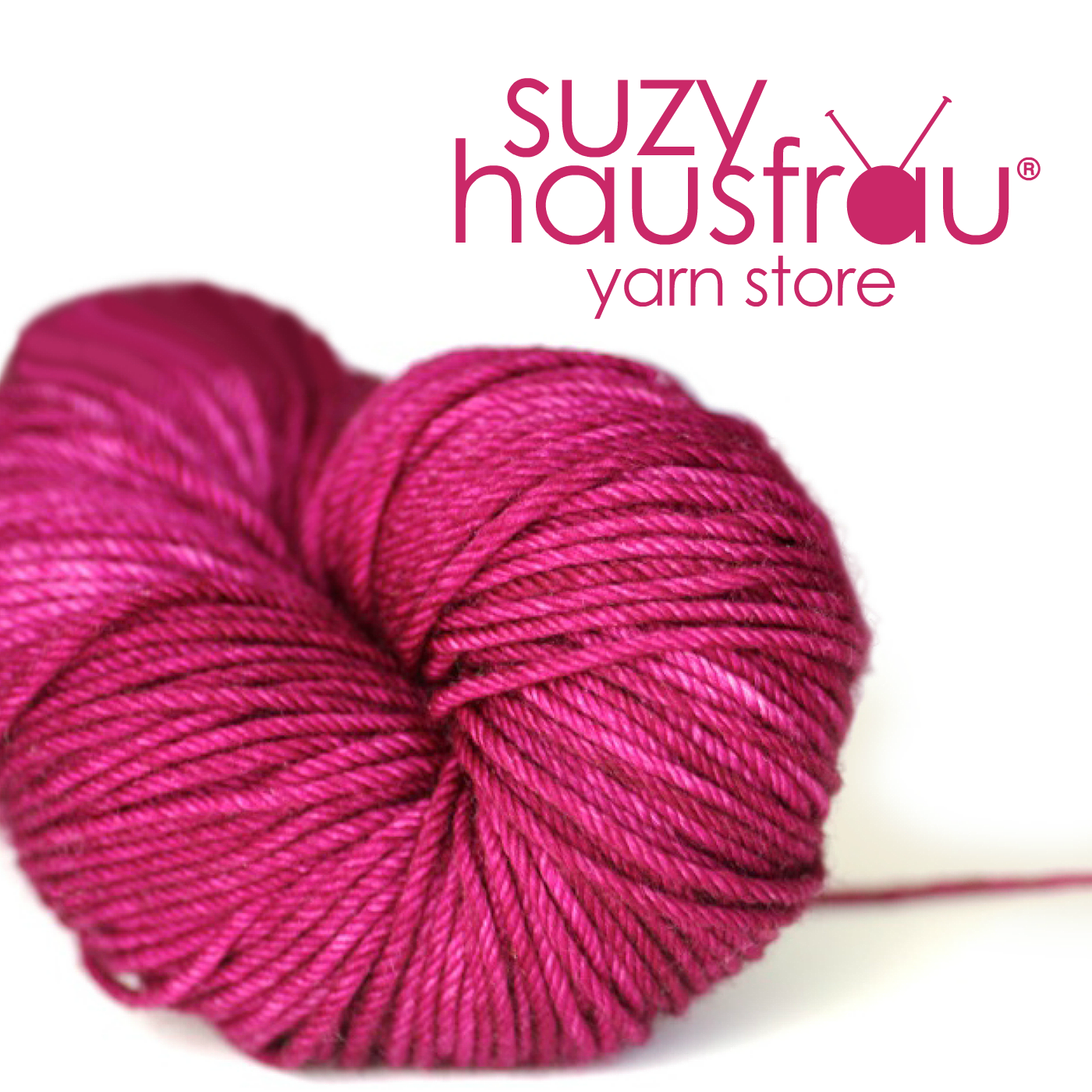